If you're ever in Cheyenne, stop by the Wyoming State Capitol. I haven't been to that many capitols, but this one is beautiful and highly accessible. Downtown Cheyenne isn't very busy, so you can easily park near the building and then take your kids inside for a quick civics lesson. 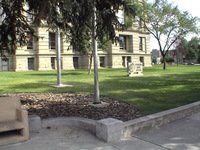 The front of the Capitol building

There it is. You head right down Capitol Avenue and run right into the building. 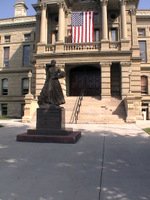 A closer look. The statue in front is Esther Hobart Morris. 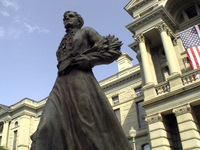 Morris was America's first female justice of the peace. She served in South Pass City, Wyoming, and died in Cheyenne in 1902. 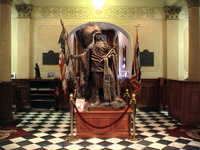 Inside the Capitol. That's a statue of Chief Washakie, head of the Eastern Shoshones. Just off to the right is the Governor's office.

The outer and inner doors were open, and we could see the Gov sitting at his desk talking on the phone. Now, that's an accessible elected official. 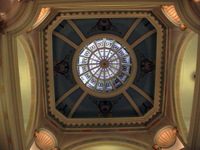 The domed ceiling of the Capitol

The beautiful domed ceiling. Can you believe they built this place for just $389,569? Of course, that was more than a century ago.

The Capitol from a distance

Exterior shot of this Pseudo-Corinthian-style building. If you know what that means, you're one step ahead of us. But we think it's a handsome building. 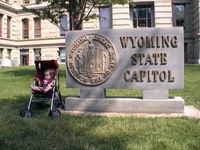 Be sure to get a picture by the state capitol sign. My daughter highly recommends it.

We have another pic where she's crying next to the sign, but we didn't want to turn people off beautiful downtown Cheyenne.

The Capitol area of Cheyenne is great for a leisurely stroll. The July weather was gorgeous - sunny, but cool and breezy. Don't miss a chance to explore this little city.

What do you think about all this? Leave us a comment below.
Old Town Wichita